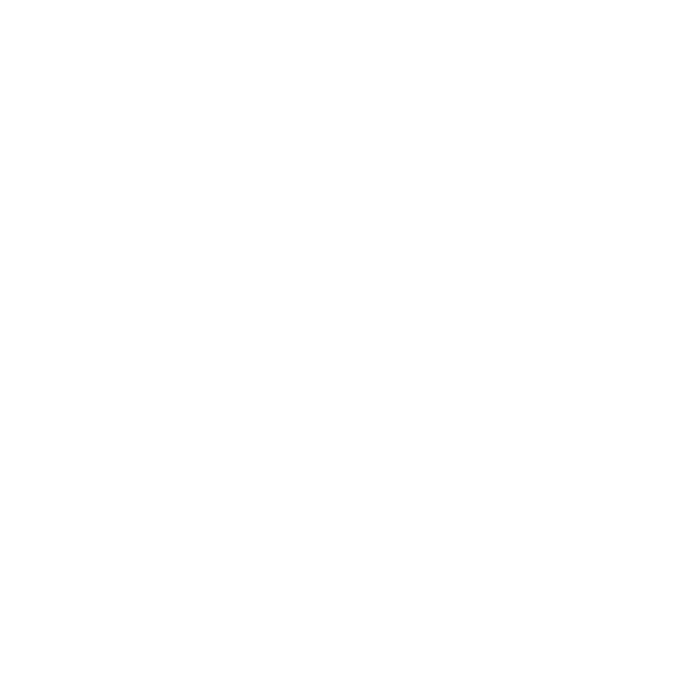 Committed to the future

While treasuring our unique craftsmanship, our aim is to evoke emotions through a singular design – a blend of innovation, precious materials and fabrics which offer functionality and elegance, always off the beaten path. 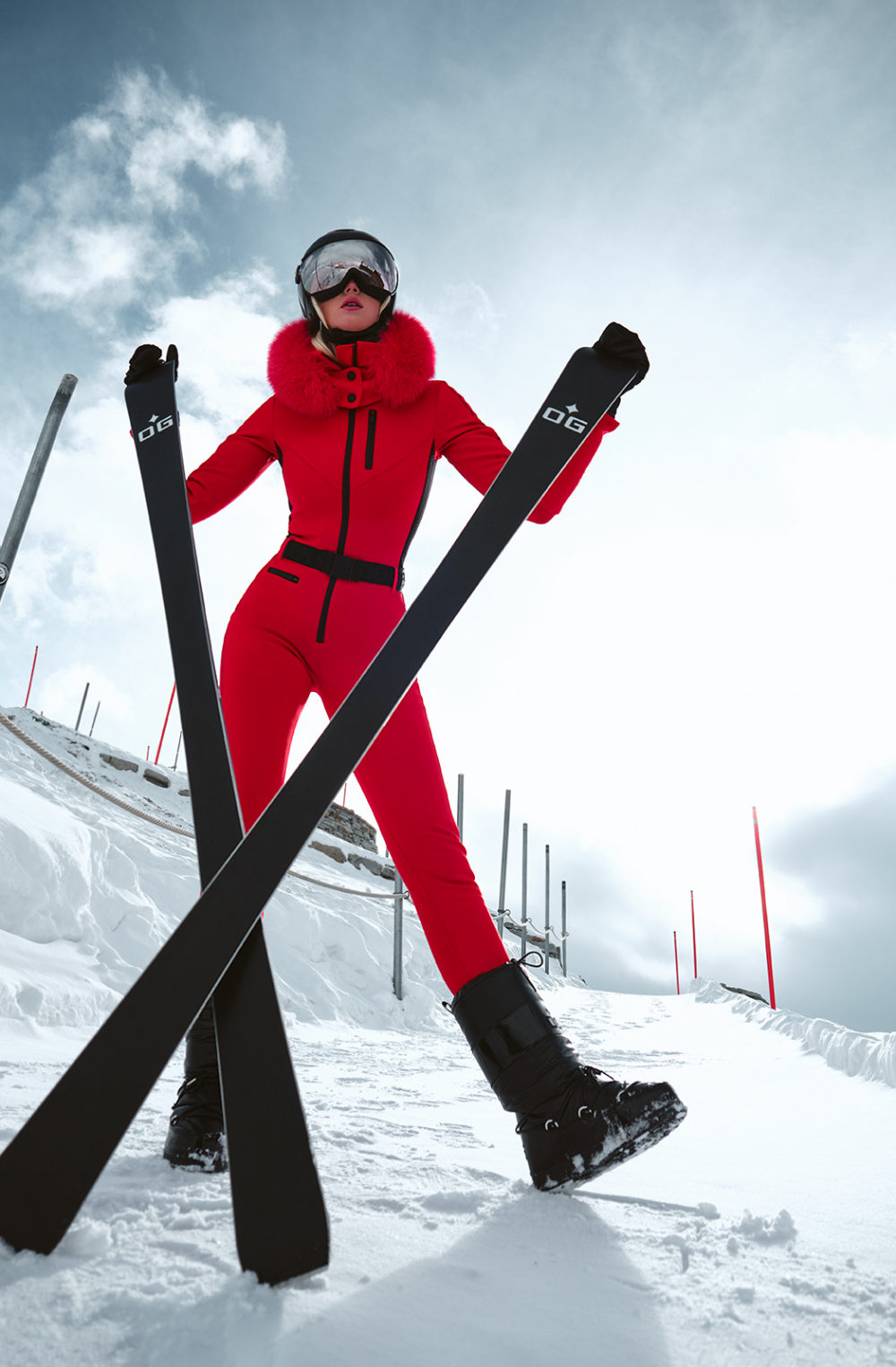 The functional aesthetics of each garment outfits the lovers of performance and excellence. Made in Italy, Ogier collections are designed to achieve excellence. The esteem for high quality craftsmanship couples with the integrity and values of our manufacturing team creates pieces which can be used and enjoyed for many seasons to come. Each design, elaborate down to the very last detail is a unique masterpiece. Timeless yet creative, the products of Maison Ogier combine the best silhouettes with bold colors. Whether it’s azure blue or bright pink our collections always represent bold style and distinction.

The functional aesthetics of each garment accompany the lovers of performance and excellence. Made in Italy, OGIER Collections are shaped to achieve excellence. The esteem for high quality craftsmanship and the integrity of the manufacturing values make the products incredibly resistant. Each prototype is elaborated down to the very last detail to offer unprecedented masterpieces.Timeless but creative, the products of Maison Ogier combine the right cut with the boldness of colors. Whether it is azure blue or bright pink, the collections represent a bold style and distinction in all kinds of explorations.

SELECTION OF THE FINEST MATERIALS

The aim of Ogier is to offer products to the customers that meet their high expectations. From their concept to their fabrication, each piece is submitted to a demanding creation process. The high quality materials allow the collections to be extremely resistant. The details are conceived and shaped in a very meticulous way to produce unique and singular products. Made in Italy, the products come from a production line that is adapted to the goals of the brand. With an approach of excellence, the collections are thus timeless as well as innovative. They are designed to create pleasure to those who wear them. The Ogier product combines aesthetics, comfort and performance. The “Total Look Annapurna’’, our high end signature look for men, distinguishes itself by its practicality. The cashmere pieces stand out by luxurious fabric combined with a strong aesthetic.

Selection of the finest Materials

The aim of Ogier is to offer products to our customers which meet their high expectations. From concept to fabrication each piece is submitted to a demanding creative process. The high quality materials allow the collections to be extremely resistant. The details are conceived and crafted in such a meticulous way as to produce unique and singular products. Made in Italy, our pieces come from a production line that is adapted to the goals of the brand. Our pieces are designed to create pleasure to those who wear them. The Ogier product combines aesthetics, comfort and performance. The “total look Annapurna”, our top of the line signature look for men distinguishes itself by its refined practicality. The cashmere pieces stand out by using luxurious yet durable fabrics combined with a strong aesthetic. 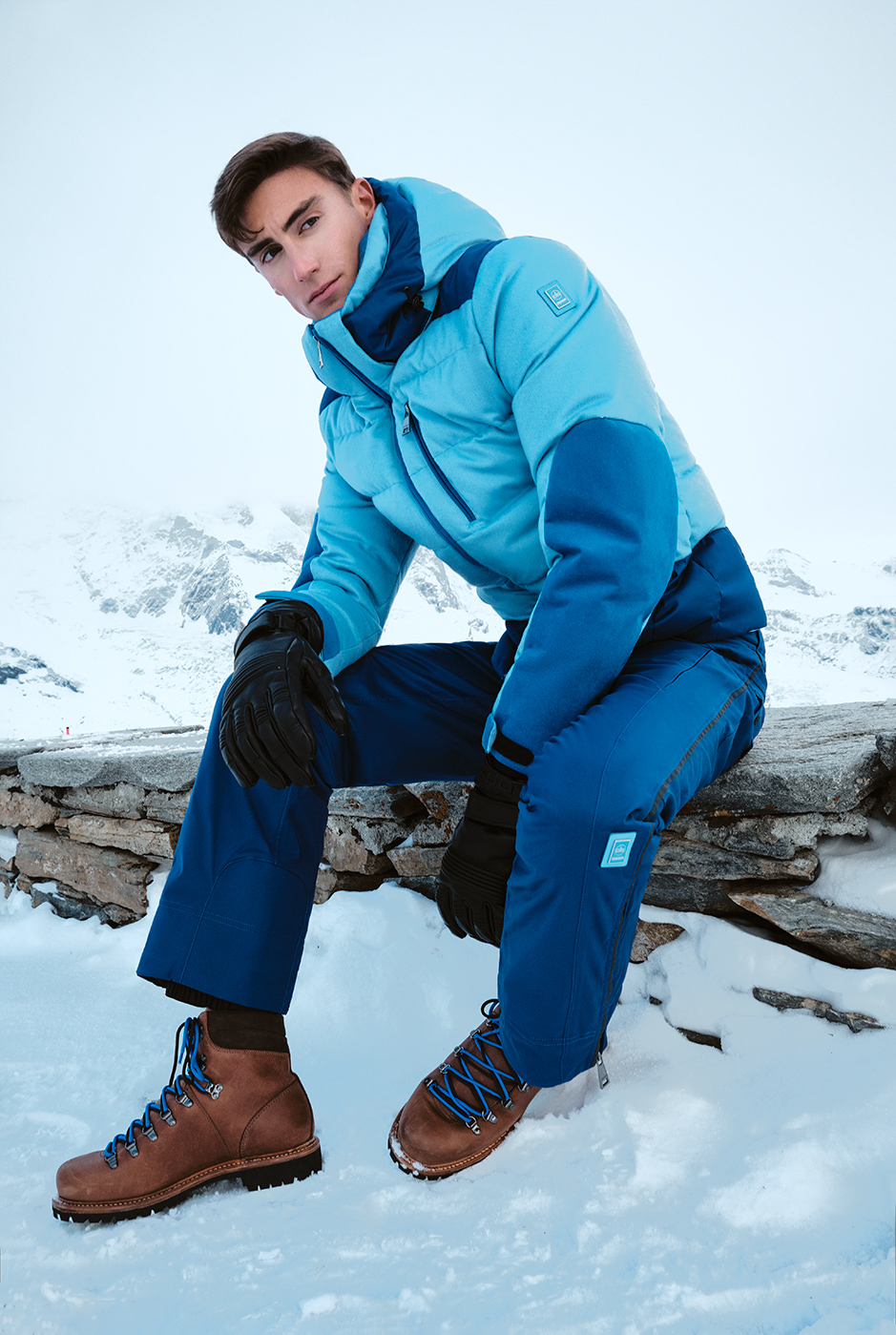 For Ogier, traveling is a life philosophy. A philosophy that we find in the collections, created to travel and live fully. Ogier advocates the love for beautiful things, but specially those that are experienced, more than possessed. Traveling brings emotions that last through time and leaves its mark in our memories. The products are created in this likeness: timeless and resistant. They are partners of travel, eternal. The outfits are never a constraint, but an impulsion towards new horizons. The cuts are well adjusted and the materials of high quality offer comfort and freedom of movement.

Ogier is a Swiss family owned fashion house devoted to creativity and high performance. Since 1948, Ogier has successfully maintained its family spirit and has affirmed its difference through a constant quest for excellence.

Positioned at the top of the shield, it is the starting point of Ogier. It is the passion of a family for the mountains and its sports, the spark at the origin of a great House.

As a majestic animal, it is the symbol of strength and prestige. It is all about the spirit of conquest, of discovery and travel.

Animal from the Alps, it represents instinct and excelling oneself, key values that have allowed Maurice Ogier to write the first lines of the House history in 1948. 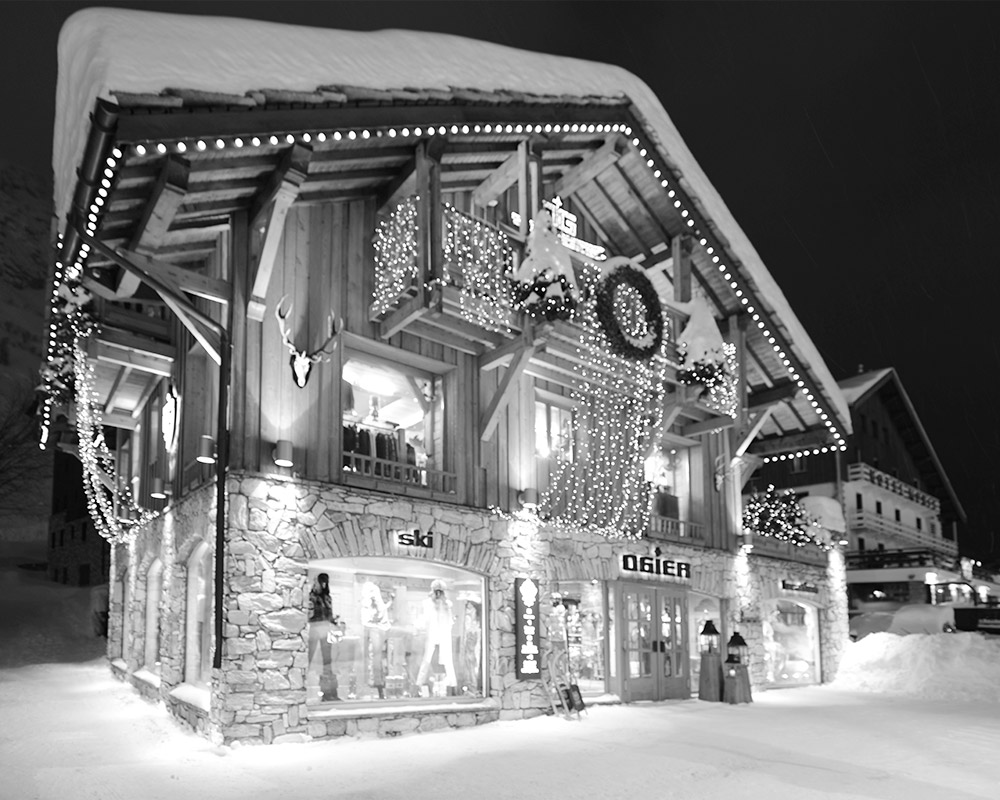 The art of living

The history of Ogier begins in 1948 with Maurice Ogier. Ambitious and passionate, he begins to develop wool clothing for mountain workers. The rise of mountain skiing and tourism encouraged him in 1960 to specialize in the ski industry as one of the pioneers. Keen to provide the finest products to mountain enthusiasts, he built numerous concepts of specialized stores. His son, Gilbert Ogier, inherited his father’s love. World class climber in 1986, with the heart of a competitor skier, he injected a new life into the project: The mountains are not only about a discipline or a destination, the white world represents an art of living.

The desire to go beyond

The desire of accomplishment and the will to go further have always been the driving forces of the Ogier family.In 2007, the first Ogier ski is created, followed in 2009 by the creation of the first fuseau as well as the Ogier helmet. Then, in 2014 the cashmere ski jackets are made. 2014 marks the year of change, when the Ogier family name becomes a true label, by the will of Laurent and Vincent Ogier who are determined to set the Ogier name into stone. In 2017, ten years after its first creation, the Ogier family launches the ‘Total Look Chamonix’’ — a true success that will become the signature of the house over the years. It is within the Alps, birthplace of the brand, that Ogier decides to open its first stores in 2014 in Zermatt, Megève and Crans Montana. Given the large enthusiasm that succeeded, several stores are opened worldwide: St. Moritz, Zurich, Courchevel or Aspen become the new destinations, with the Ogier signature. In 2021, always driven by the desire to go beyond, the brand is focusing on an international expansion — in the USA, Russia and Asia. 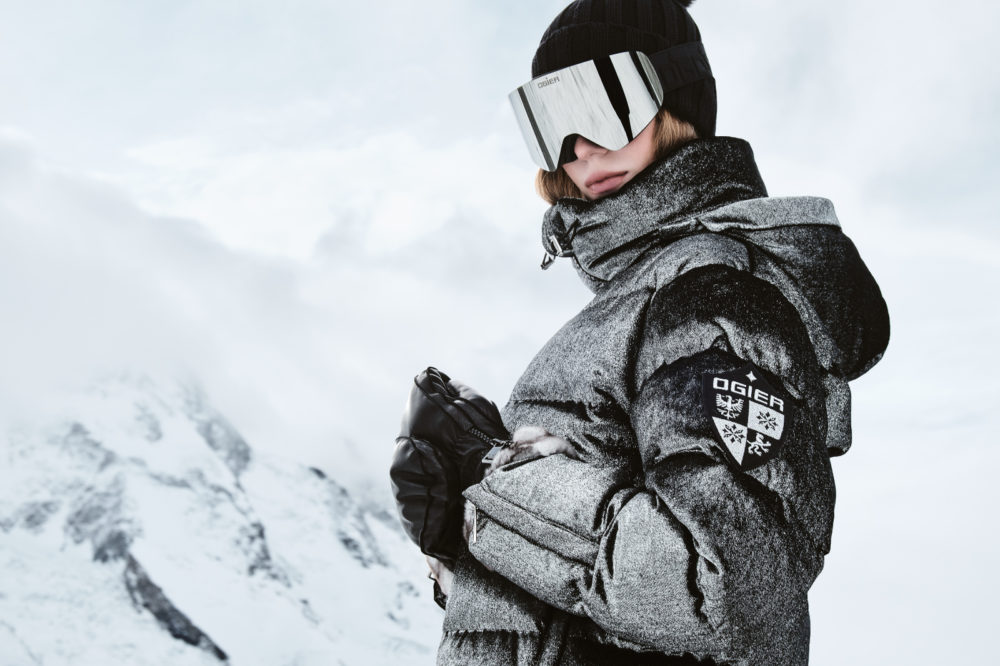 Born in the heart of the Alps Mountains, the Ogier collections are inspired year after year by the eternal beauty of the summits. The desire to protect nature is inherently linked to the brand’s DNA. This is the reason why Ogier imagines its collections with a respect for the environment.

Thanks to their aesthetics, the products become essentials as well as timeless pieces. Because of the super-resistant materials, they do not alter over the years and remain intact after intensive sport practices.

Convinced that overconsumption is closely linked to overproduction, Ogier is engaged to only produce limited volumes, a those indispensable for sales. Involved in Waste Management, the production is calculated and adapted to the needs of the brand. Some products, like accessories, are produced from secondary raw materials to avoid waste. Aware of the environmental stakes of today and tomorrow, Ogier is proceeding to a sustainable transition. With the desire to evolve in perfect harmony with nature, the brand’s aim is to have the lowest environmental impact

Within the context of a unique customer experience, Ogier conceives its stores as the most luxurious settings. The authentic style is faithful to the mountain chalets with a contemporary decoration. The materials are natural and warm, like wood and wool which are combined with the transparence and the purity of glass. Each material is preciously chosen according to its authenticity and quality. Wood, whether old or modern, is used for the walls as well as the furniture. Wool and leather cover the seats and offer optimal comfort. The floor is covered by white marble or beige carpets. Finally, the glass and mirrors create an illusion of perspective. The Ogier lounges, present in every store, provide a restful interlude, ideal for exchange between enthusiasts. 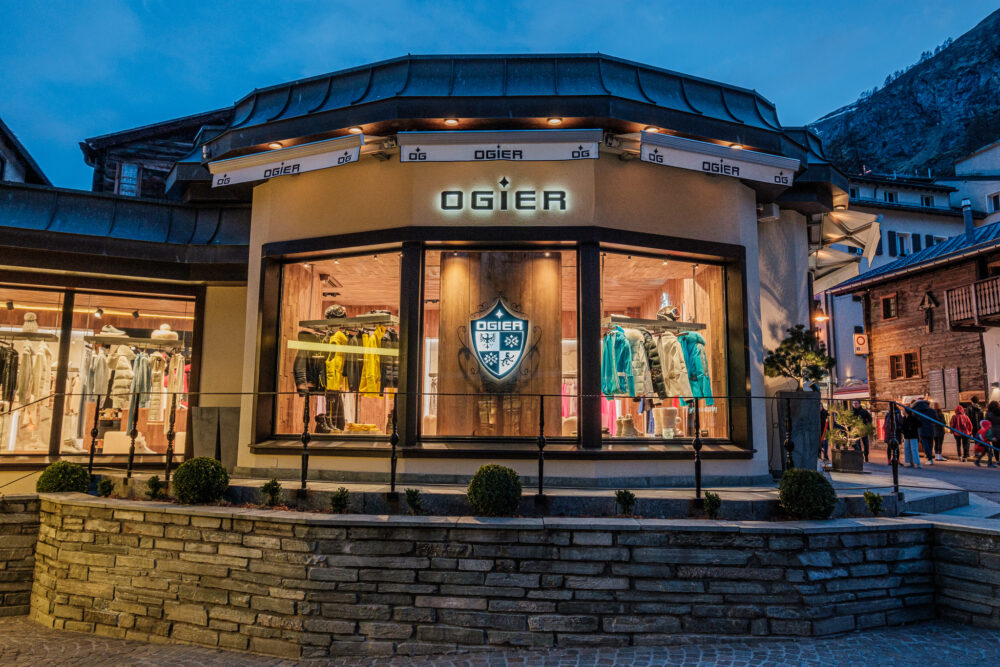 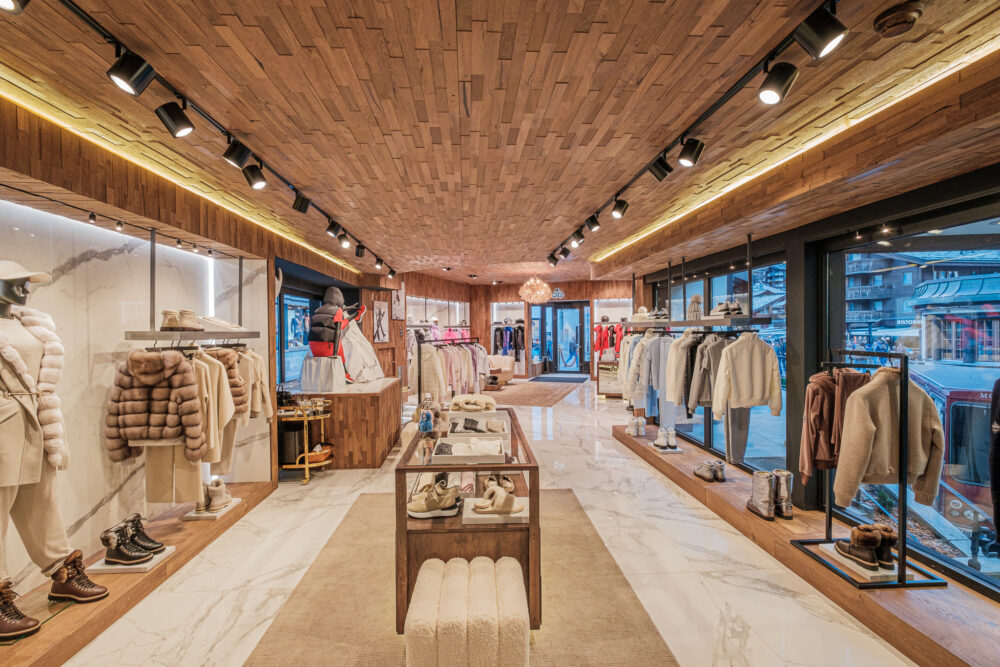 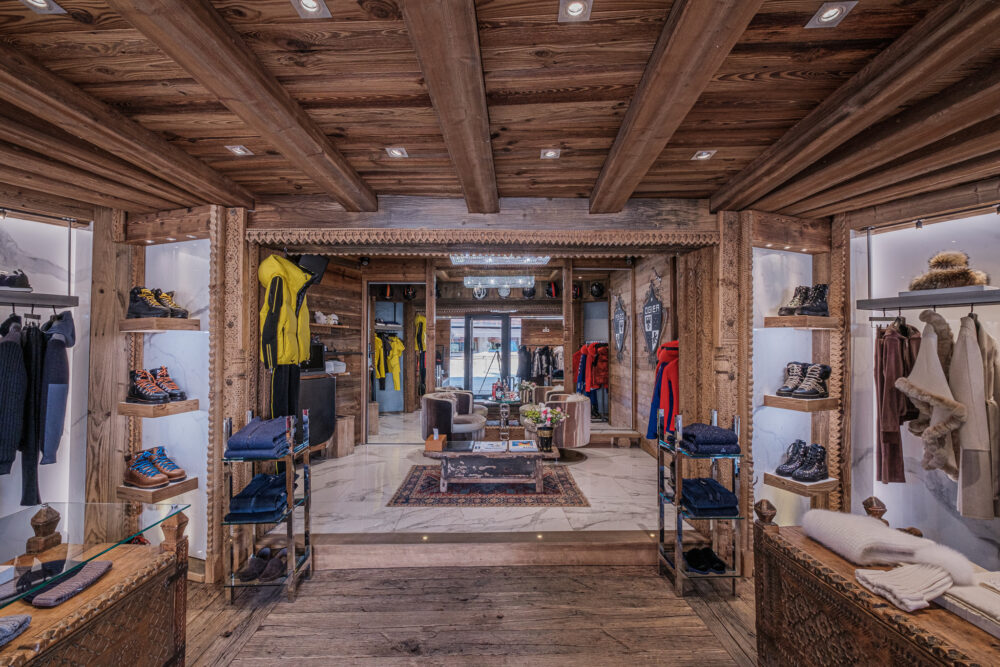